Welcome to Brain Dumps. Every week or so, I watch podcasts/shows/series that provide tons of value and fascinating ideas. I then compress the content into a quick, 10-15-minute reads. The format is easy, digestible, and is something you can easily refer back to.

Cool, let's dive into it. It was about time I did a video on Twitter superstar Jack Butcher. This video talks about building a reputation on the internet and how to earn a living from the reputation you've built. Not to mention, host Justin Mikolay asks wonderful, thoughtful questions about the entire process.

What exactly is Visualize Value?

Jack is the founder and CEO of Visualize Value.  VV is a result of a 10-year career stint in corporate advertising and freelance work.

VV is "making the intellectual capital of organizations, businesses, and people tangible." It's a mental wealth service.

VV has a community. One of its main components is its "Build Once, Sell Twice" course. This course performs exceptionally on Gumroad: it has racked over 6-figures.

So if you weren't convinced by now, Jack knows his stuff. 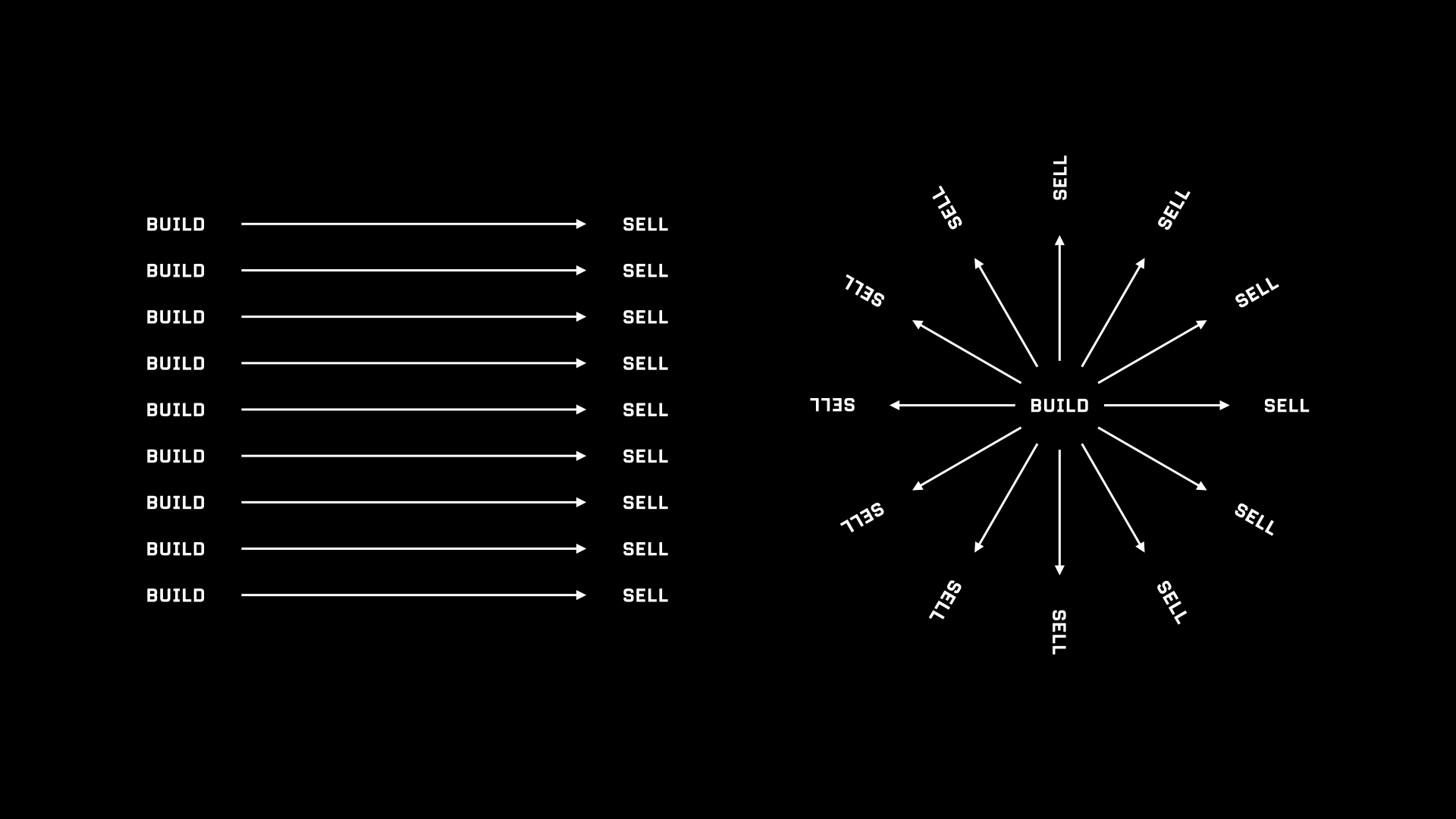 Where the Idea Came From Originally

Jack first got the idea for Visualize Value from Naval a few years back. It was from the infamous tweetstorm "How to get rich without getting lucky".

At the time, he was making an alright living from corporate life, but the lifestyle was wearing him down.

Exhausted by long hours, demanding work, and lack of autonomy, he decided to try his own thing.

What really stuck with Jack was this particular idea: 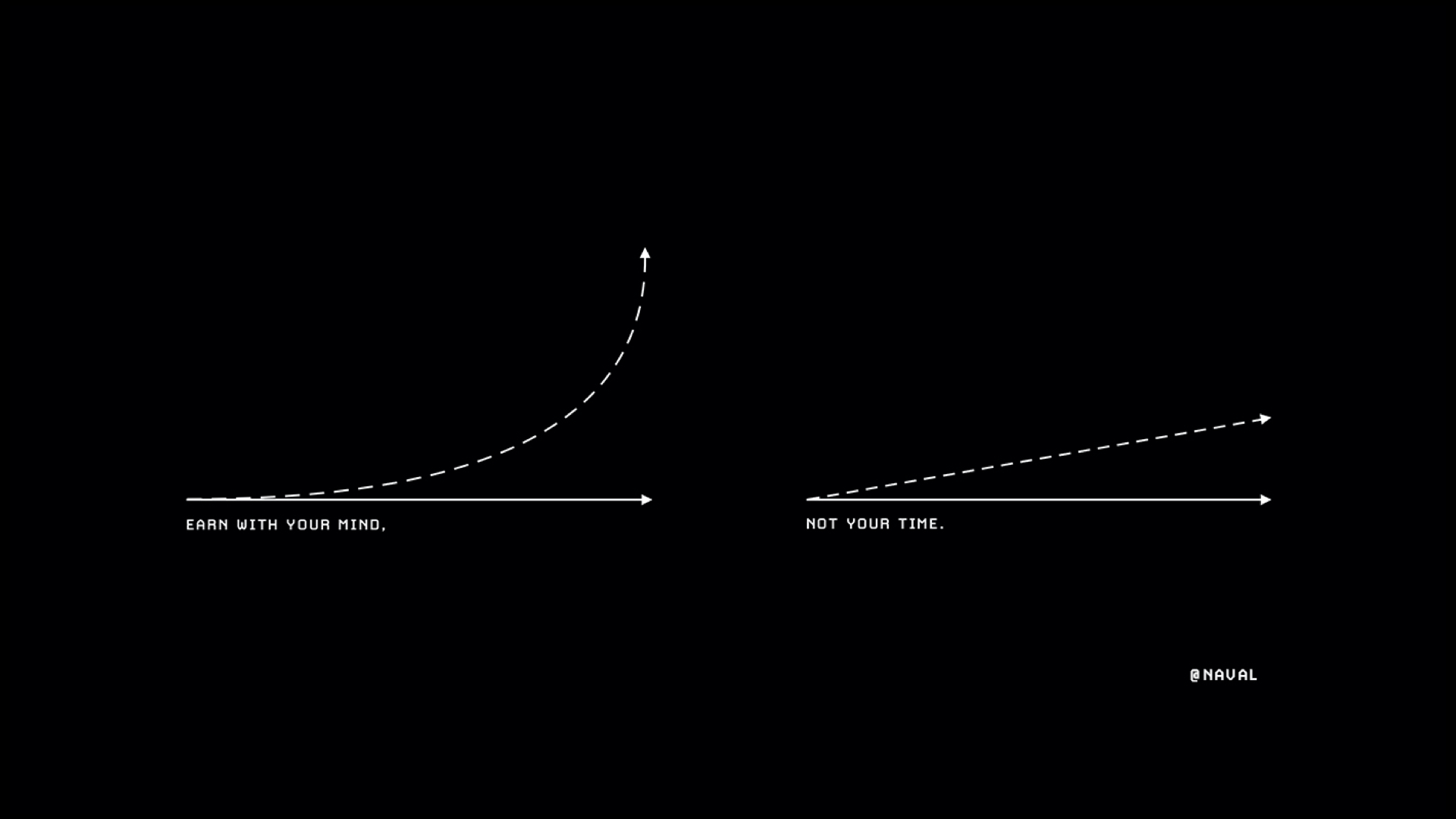 Everyone understands this idea in theory. But it's another game once you feel it's effects IRL.

Jack made the above graphic after reading Naval's tweetstorm. At the same time, Jack's mind was beginning to shift about work.

He decided to take action.

After 18-months of implementing what he learned in that tweetstorm, he caught Naval's eye.

But how did that happen? Well, Jack was able to productize his experience. 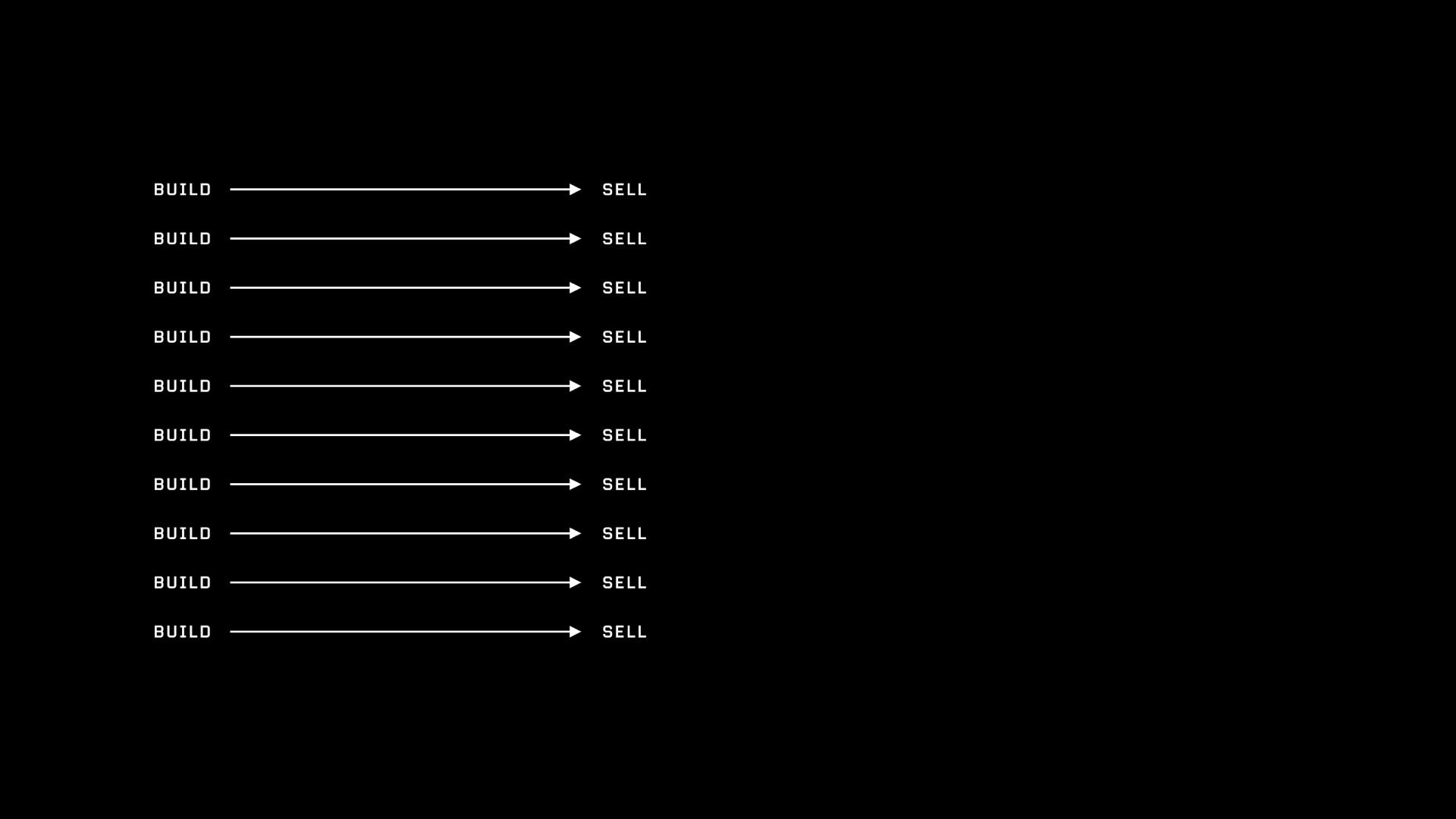 First, understand that the majority of businesses operate by building once, selling once.

Think furniture stores, pastries, even selling time as an hourly employee to a business.

This shifts once you can sell something indefinitely. Platforms like Gumroad allow you to do this. 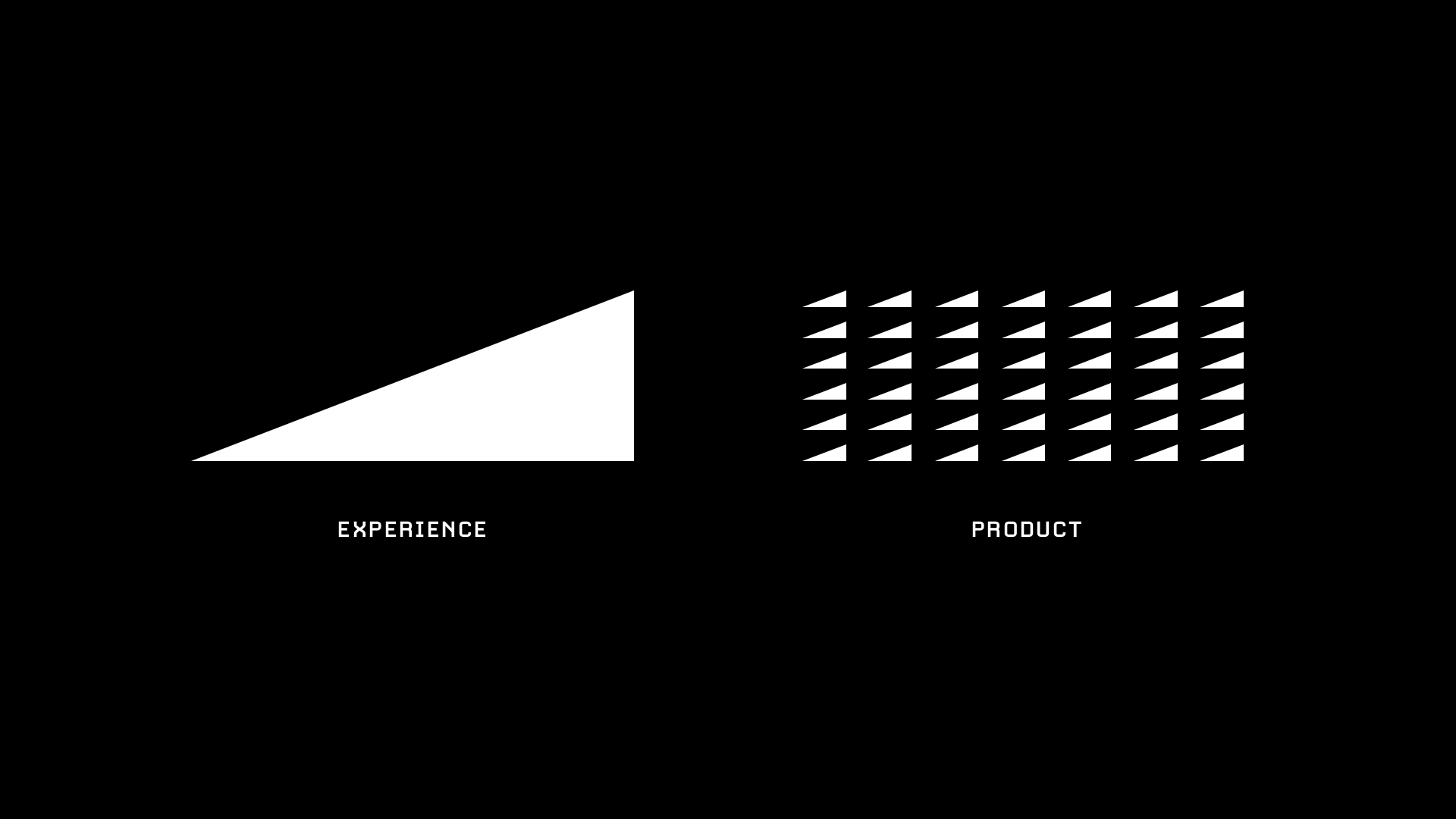 You want to productize your experience.

In other words, build something that can either educate, entertain, or enable somebody else to do something. Your task is to put your experience into a product that can be built once and sold twice. Or else, time = money, and you won't be able to accumulate wealth.

There is a sequence to this.

Sequence to Building Once, Selling Twice 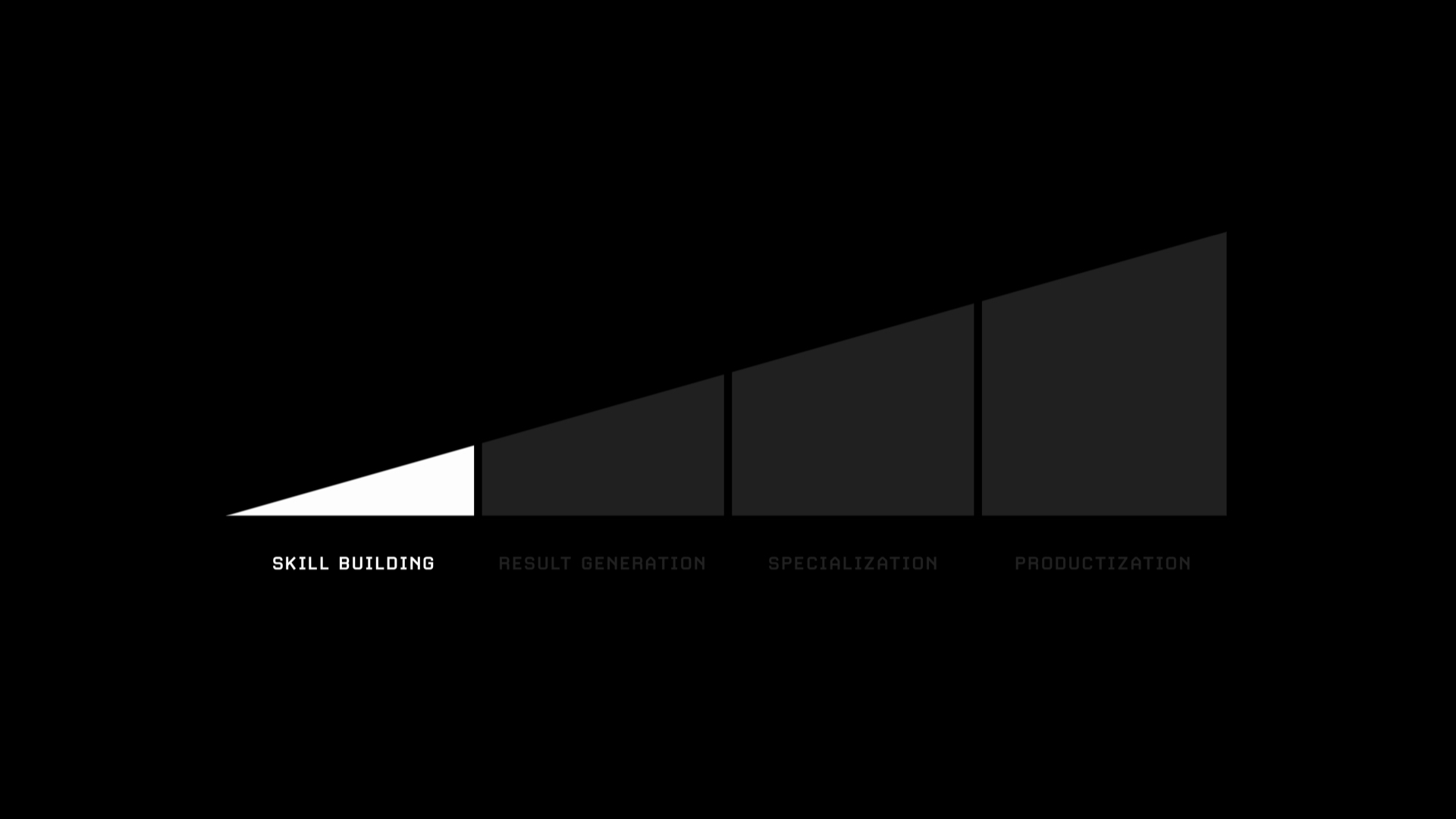 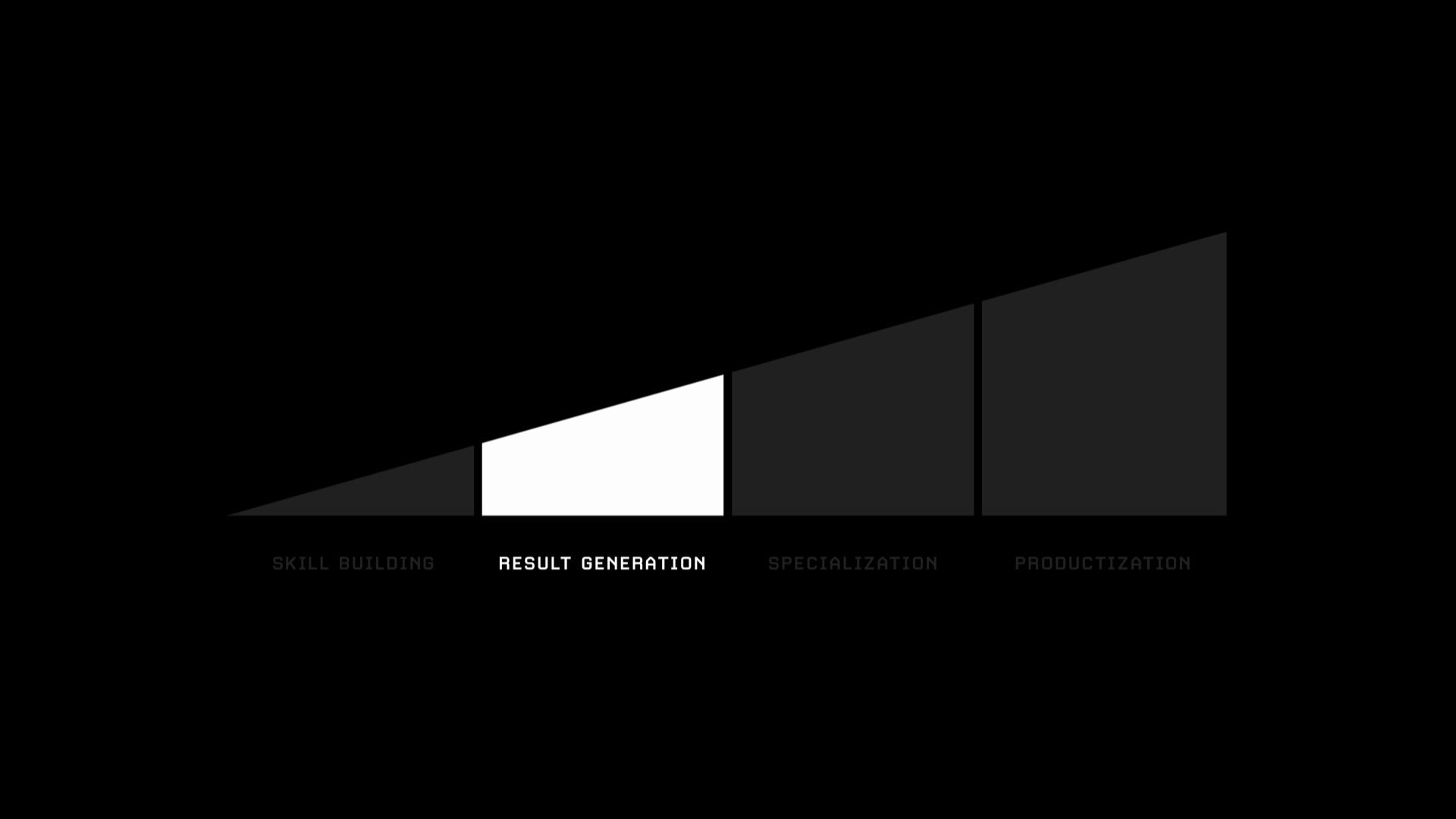 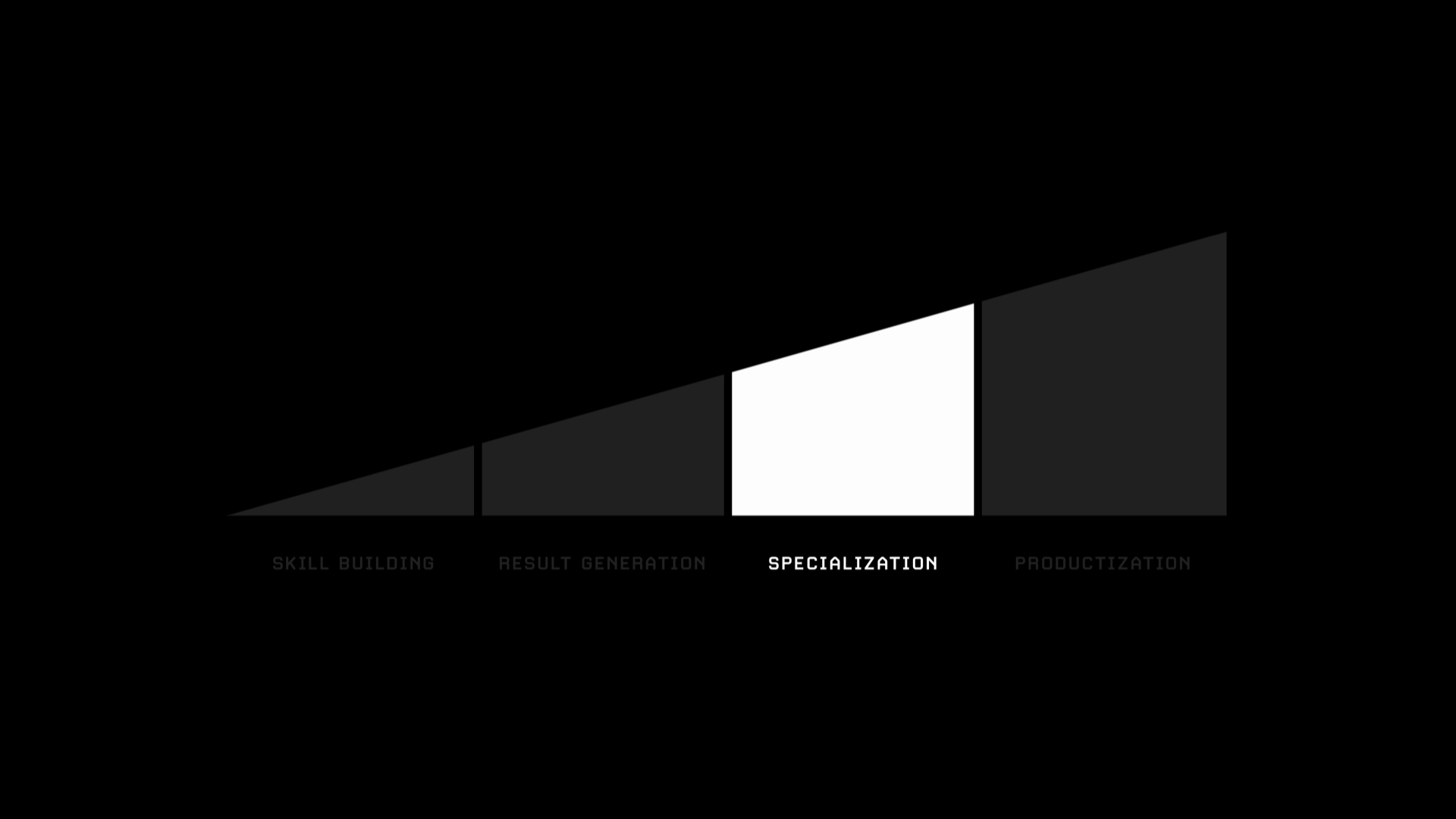 Okay so now, you have the skills and you've gone through the process of applying them in different contexts.

For Visualize Value, this shift happened when they fully restricted the type of work they were doing. This would let them charge more and have less friction during the delivery process.

By being hyper-specific, they thin out the types of people who want to work with them.

You'll start to build an audience during this stage, being recognized for something very specific.

You want to create demand, instead of responding to demand. 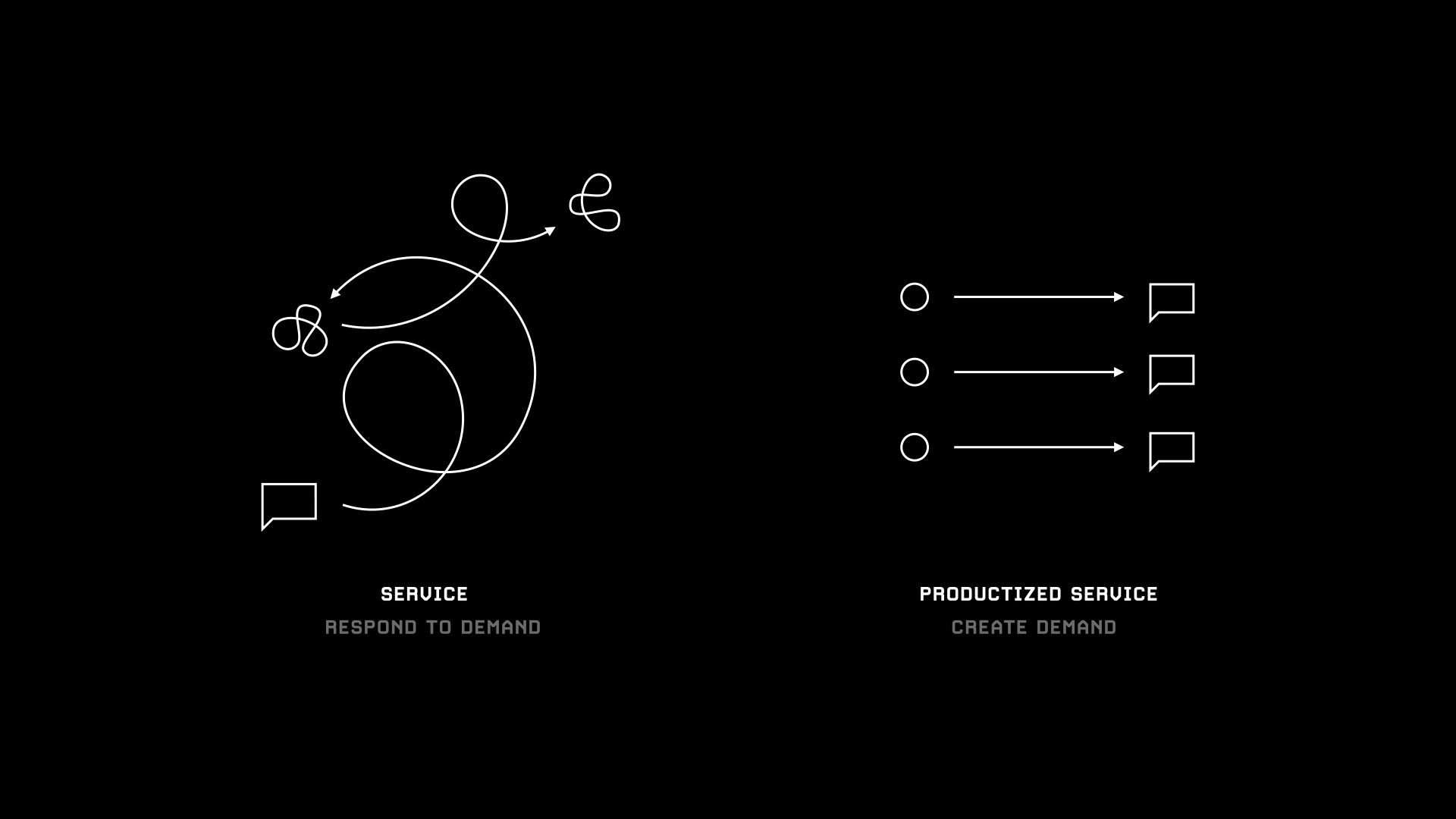 Here, you want to take your skills and productize them.

And at the very end, this is what you get...

How to Get People To Notice What You're Doing 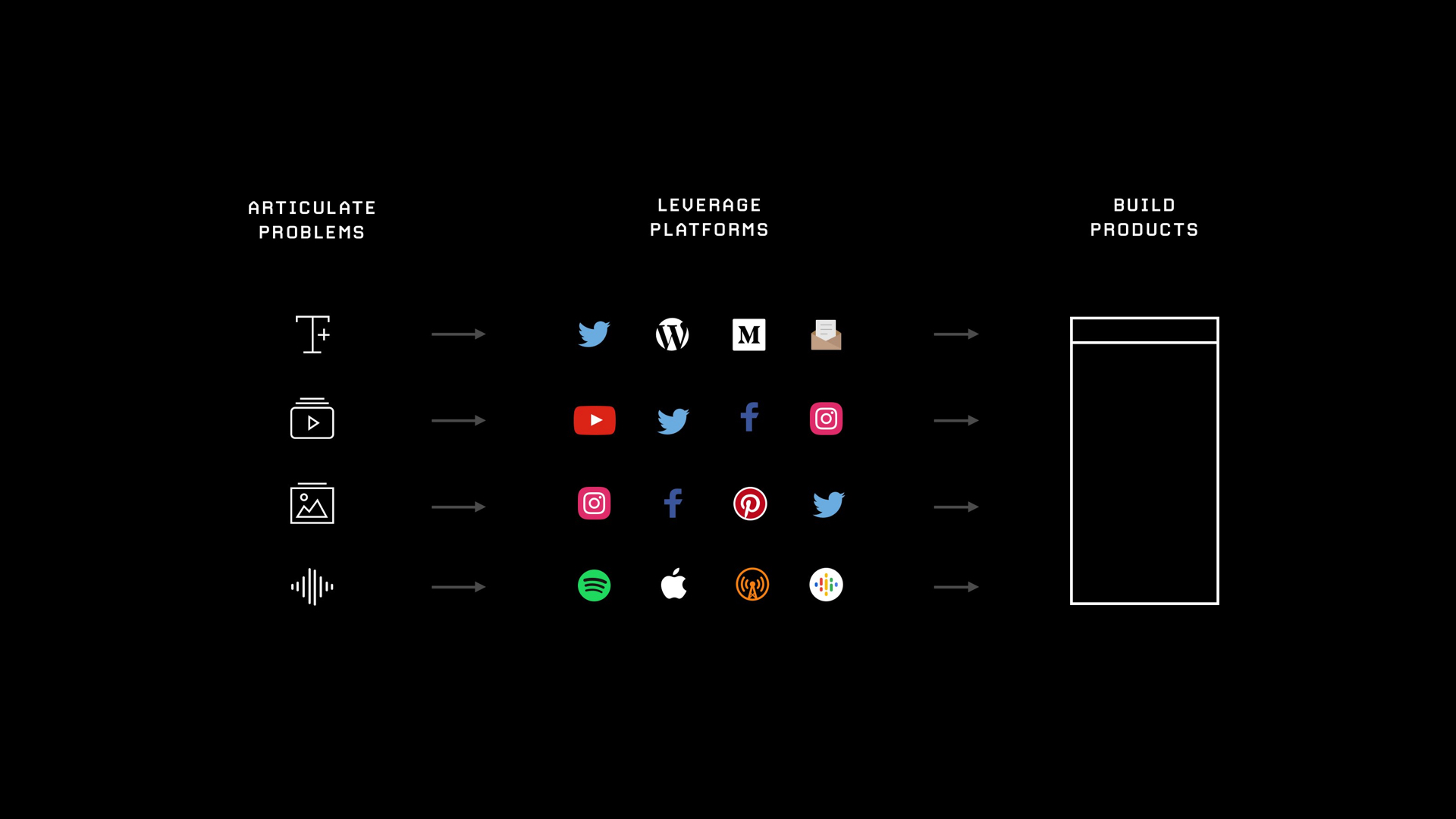 Visualize Value was built all organically.

You want to publish work that demonstrates your ability to do, describe, or analyze something a certain way. Depending on the product, this might change.

But the process doesn't.

What matters is your ability to articulate a problem and create something that will hold attention. You then harness the power of platforms such as Instagram and Twitter to distribute your ideas. Ultimately, you funnel that traffic to a product page.

As simple as that.

On Building in Public

When it comes to building in public, you'll want to create content at every waking moment. This means posting about when...

Ultimately, what you are trying to do is create a loop of transparency and trust with your audience. You want to understand how people are using your product and why it's bringing value to their lives.

If you put out a ton of value, you will build up this reservoir of reciprocity and trust that will lead to sales.

And who doesn't love that? 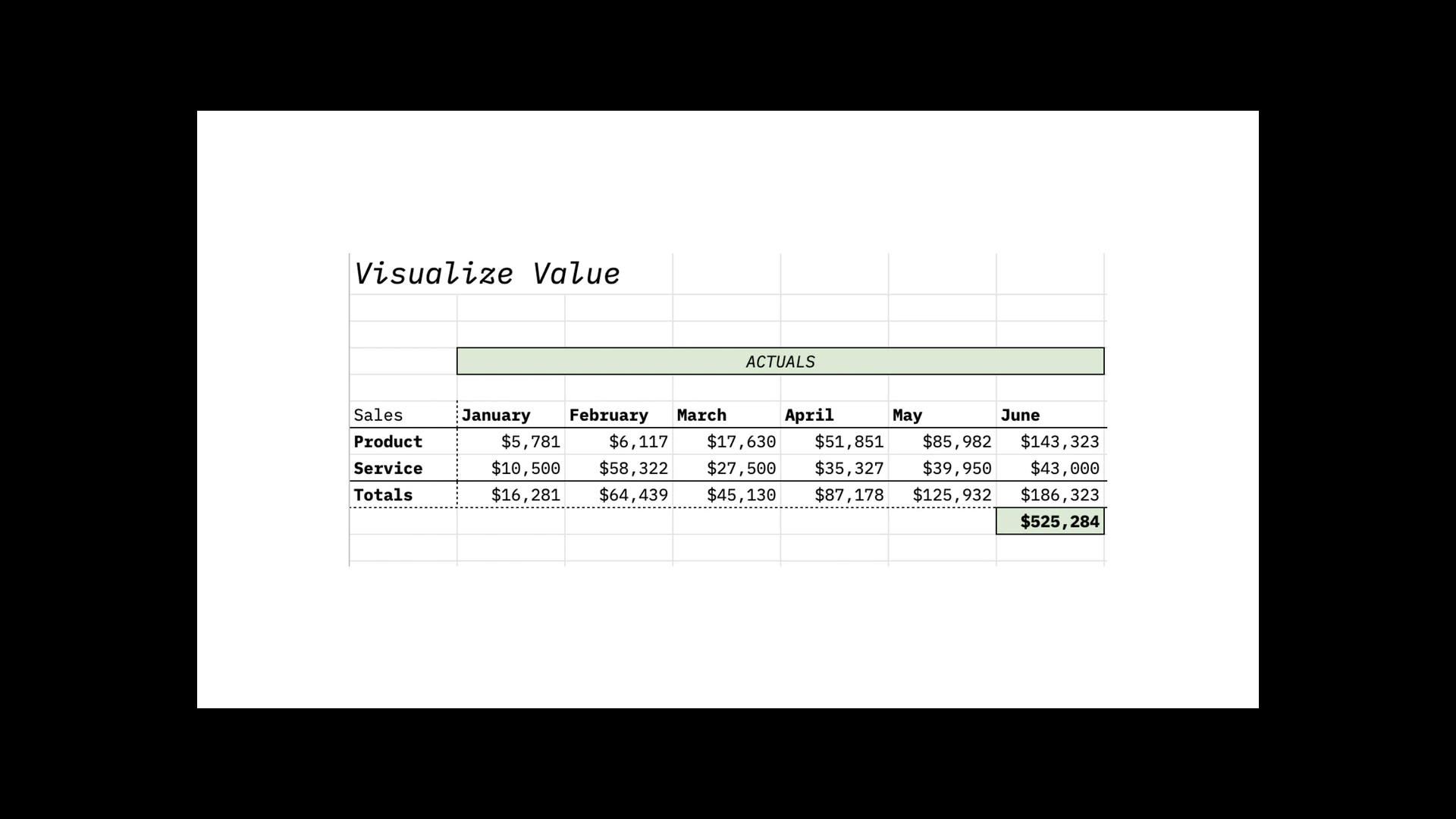 Here, Jack's income was fluctuating quite a bit. It's hard to predict when clients will need your services or the hours that will need to be spent solving certain problems.

The product scenario is entirely dependent on your ability to promote.

If the product was built, then you're spending your time promoting.

There's no ceiling to the revenue you can generate.

It's just up to your ability to market it effectively.‍ 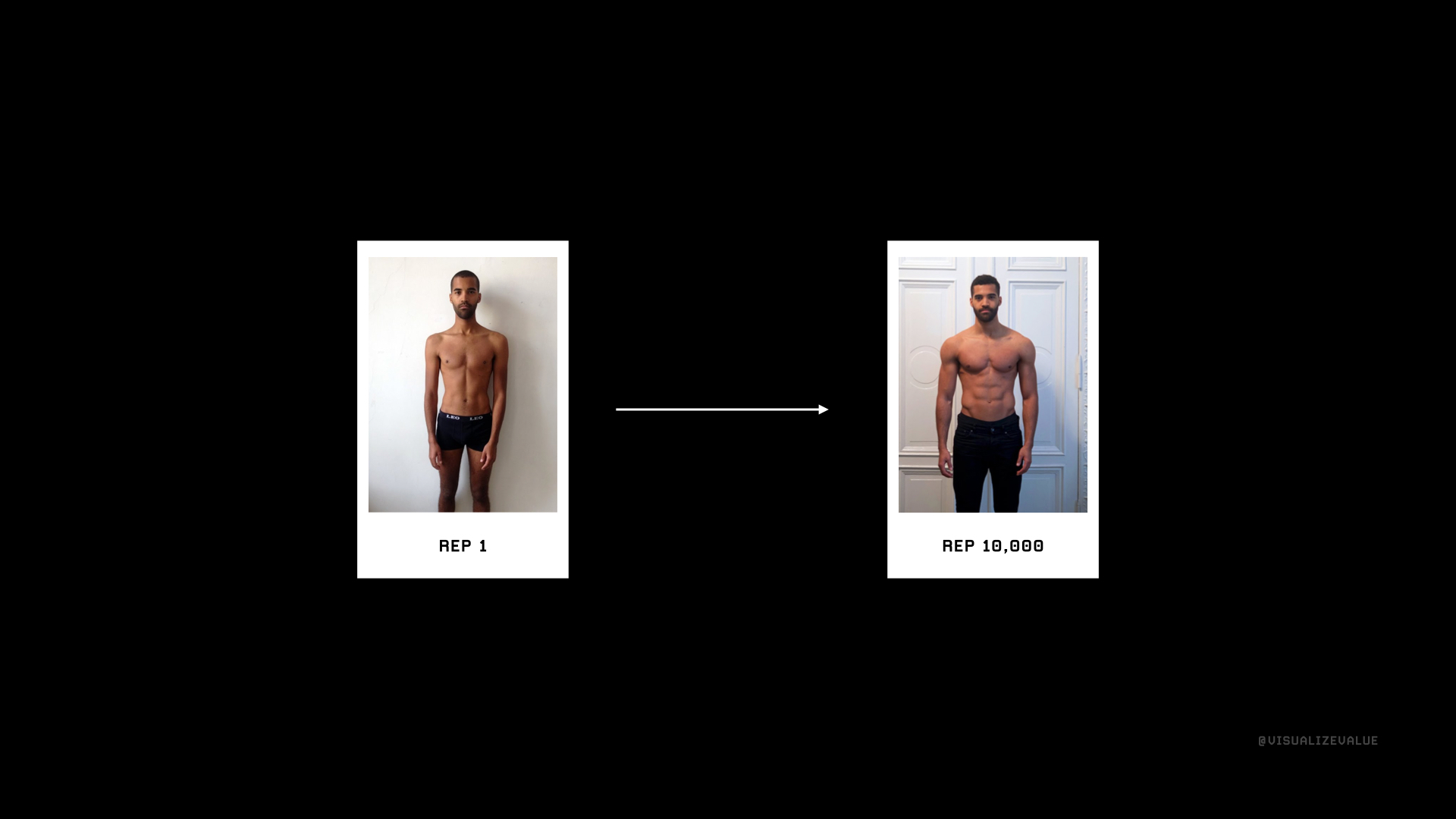 You have to understand that these will be a major component of your journey.

Do not gloss over it.

The first ten minutes meditating are hard. After 10 months, you can do 1 hour, no problem.

It is all a game of repetition.

Anybody who is telling you any different is selling you something that's not going to work.

Aside from a biological process, Twitter is another great example of this.

Each Tweet you put out builds you up over time.

Now, it's also important to understand that many people try to rush this 4-step framework (skill-building ➡️ result generation ➡️  specialization ➡️  productization) but take your time with this. Especially when it comes to the first two steps.

You don't need an amazing, fully functional product to be successful or get attention.

Learn, build, share in public. This is what will draw people to you first. 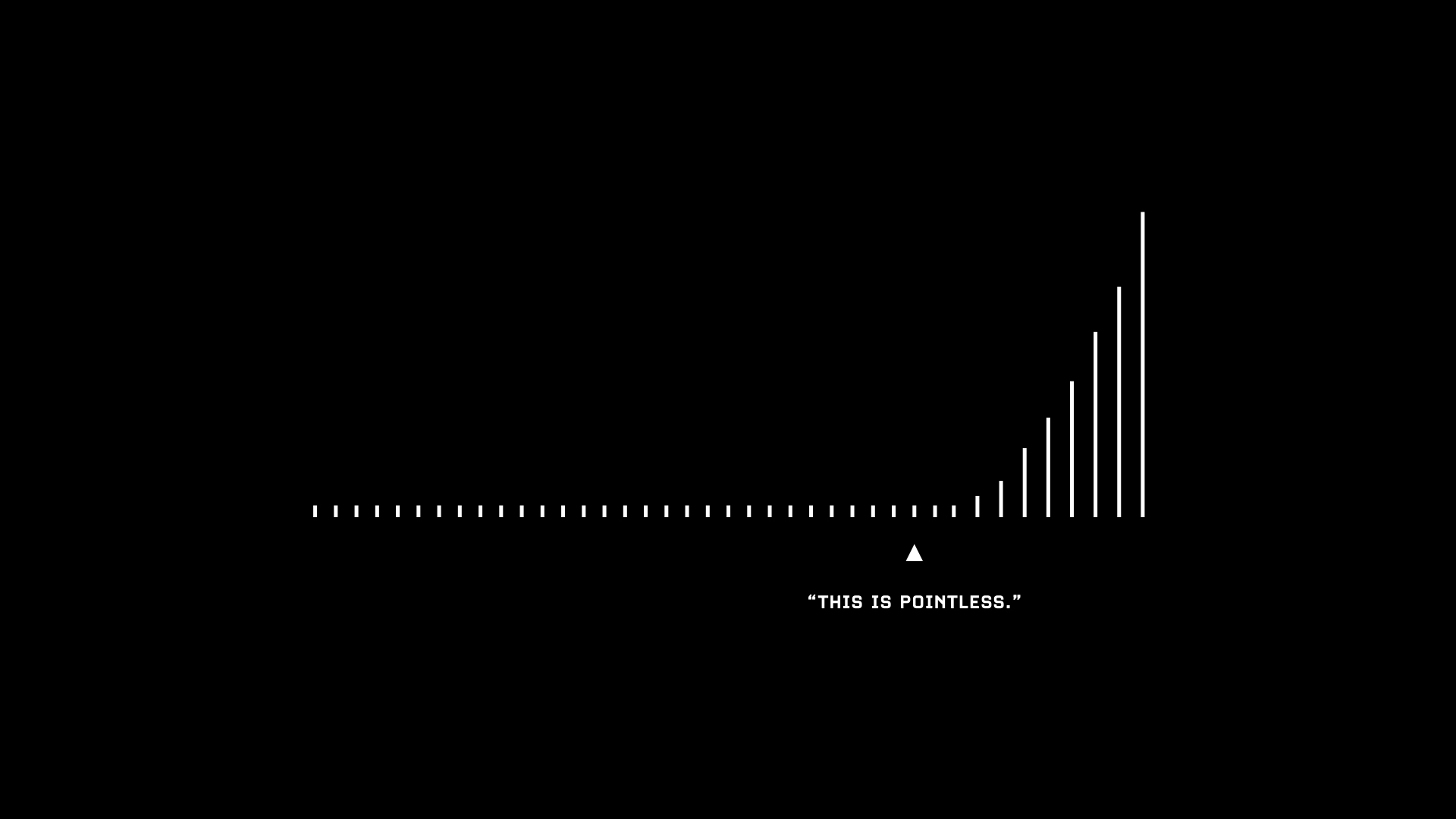 Compound interest (the 8th wonder of the world) compounds meaningfully after the majority of people have given up on it.

Continue putting your work out there to build a network of people who trust and value what you do.

If you are doing something valuable, this graph will eventually play out.

For creative + wildly successful people like Jack, aren't you curious on knowing...

What the hell is your rhythm? Like, how do you do all this stuff?

The Idea of Restriction and Restraint

This thread has changed the lives of many, many people.

Find an idea you really want to implement, and write about how you're implementing it.

How To Convey Your Message

"I often think right before I tweet what my most ardent critic would say about how I am conveying this message."

As mentioned earlier, you want to run these Tweets through a filter of objectivity.

As for the great writers on Twitter (Naval, Sahil, David Perell), they're good at writing because they've been around a lot of different people and experiences. To be a good writer, you'll want to have a rich, interesting life.

Treat writing as a process of discovery by deletion. Take out any sugarcoating and escape clauses and simply declare what you have to say.

Never write "I think" - your name is already on the paper.

Reflecting on Permission and Failure

You don't need permission to prove yourself.

If you're scared to start that thing because you might fail, here's a reminder: you're already failing.

Question: Jack, if you had to start all over from scratch, what's the first thing you'd do?

For Jack, this is when he was exposed to the economics of the graphic design business. He saw how much his time/work was being valued at and how much clients were paying the company. A lightbulb went off.

The first thing he'd build then would be a profitable service business that would've allowed him to hone in a skill set that he could ultimately a reputation around and scale his income with.

The thing is at the end of the day you can't really "cheat" the process.

You need to put in the time and effort to learn and perfect your skill set.

Focus on turning the things you're interested in into tangible outputs that you can share with the world. Building up a reputation takes time. Consistency and hard work is all you need.

Question: Where do you see Visualize Value in 5 years?

VV is a byproduct of Jack breaking out of bad patterns and getting a new lease on life.

Inspired by what he'd learned, he laced it into his business model. Each graphic design he'd put out, which made a valuable idea simple to understand, could be valuable to someone.

He realizes there's more he can be doing with VV than just putting out designs and teaching others how to design.

VV would like to eventually become a media brand.

The first iteration of it will be a web app that's article based. It will be categorized around these big ideas, such as "How to Dial in Your Mindset to Operate __ Way" or "How to Arrange Your Finances."

It won't just be for the digital online creator community. It'll be for everyone.

The idea is to have an income stream tied to an asset. A startup usually employs this "build once, sell twice" methodology, like Saas, Social Networks, etc. That's how software products have these enormous margins. They build it once, and they can sell it to a thousand people. Marginal cost of replication.

Question: What does it take to build something like Visualize Value?

You need to have skin in the game.

You wake up and do as much work as you need to do to keep the wheels on the business rolling.

If you exist in an environment where you don't need that level of discipline to fulfill your obligations, then you just don't have it. It's purely contingent on how you make ends meet.

You don't need more discipline. You just need a better reason to be disciplined.

If you don't have that better reason, then you won't be able to drive out those behaviors.

For example, you don't procrastinate in a situation when you're in danger. If you see a bear, you're gonna RUN.

Necessity is the mother of invention.

Also, it helps to make commitments to people. You will be more inclined to uphold your commitments.

Read this article on Notion

If you are building something, it is far more useful to focus on the work you are doing to produce the result than the result itself.

To help understand this idea, consider the contrast between the two concepts ancient Greeks used to think about time.

It should be relatively simple to identify when we aren't accumulating net new experience, but in practice, it doesn't seem to be.

Language is an incredible tool. It makes it possible for us to externalize what we think and communicate it to others.

Buying Time
Dec 11, 2022
The extent to which anything keeps working after you stop working is how much time you earn from making it.
Problems
Dec 11, 2022

To make progress, we must solve harder and harder problems in sequence.